Gastric dilitation and volvulus (GDV) is a deadly condition in which the stomach becomes dilated and turns over on itself cutting off the blood supply to the stomach. It is commonly referred to as 'bloat' and can result in severe illness and even death within hours. It most commonly occurs in large deep-chested breeds such as German Shepherds and Great Danes though it can happen in any breed.

Because we know that certain breeds are at a higher risk of developing this deadly condition, it is often recommended that a preventative procedure called a gastropexy is performed. 'Gastro' refers to the stomach and 'pexy' means to surgically affix or attach. This procedure affixes the stomach wall to the body wall. While this procedure does not prevent the dilation of the stomach that can occur with GDV, it can prevent the stomach from rotating or turning over on itself which is what results in such deadly complications. Below (Figure 1) is a picture taken inside the abdomen - the stomach has been sewn to the body wall:

There are many methods of gastropexy. Most at-risk female dogs will have this procedure performed at the time of ovariohysterectomy (spay) since the surgeon will already be performing surgery in the abdomen. For dogs who are not planning on being spayed or neutered or male dogs where castration does not require abdominal surgery, we are always looking for the least invasive way to perform gastropexies.

We currently offer a gastropexy procedure where the only incision made is on the side approximately 3 inches long. It is called a NOTES gastropexy where NOTES stands for Natural Orifice Translumenal Endoscopic Surgery. Our patients are placed under general anesthesia and an endoscope is placed through the mouth into the stomach. The stomach is inflated with air so it is pressed against the body wall. Below is a video of an inflated stomach and you can see the surgeon's finger poking looking for the right place to make his incision from the outside:

The surgeon makes an incision and grabs the stomach. The stomach is then sutured to the body wall (eventually a strong scar tissue adhesion forms between the stomach and body wall holding the stomach in position) and the incision closed. The picture below (Figure 2) is taken with endoscopy. The light area is where the surgeon has pulled the stomach up and is suturing:

Most dogs will go home the same day of the procedure.

Doctors Levin and Hammer are available to perform this minimally-invasive and potentially life-saving procedure. Please contact them for more information or to make an appointment. 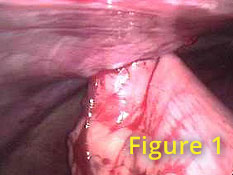 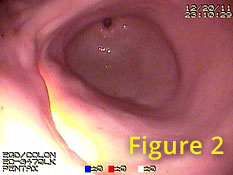