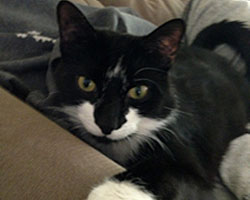 Stubby received his name after being rescued as a stray two-month-old kitten in September 2011. Stubby had become stuck inside a wheel well of a minivan that had just driven over him. As a result, Stubby sadly lost part of his toes on his hind leg and partial function of his right front paw.

Stubby recovered and was adopted by one of his rescuers! All seemed great for the little guy, but then he faced a new battle eight months later. Stubby became extremely lethargic and barely able to move. His breathing became labored and it was clear that something was seriously wrong. He was taken to his primary veterinarian who then instructed his owner to take Stubby to NorthStar VETS immediately if he were to survive the day.

Once at Northstar VETS, it was determined that Stubby was almost out of red blood cells and needed a blood transfusion immediately. He was diagnosed with Immune Mediated Hemolytic Anemia, a disease in which the body attacks its own red blood cells. Stubby received four blood transfusions during his stay in the Intensive Care Unit. Now, though still on medications, he has once again recovered and is happy and well-spoiled. Without the blood products with which he was treated, Stubby would probably not be with us today to share his story.