Case Study: Riley the Cat Recovers from a Brain Tumor

Riley is a 10-year-old domestic shorthair who presented to NorthStar VETS with a history of weakness, twitching and tremors, dilated pupils and behavior changes. An initial work-up included blood work, urinalysis and x-rays, and was unremarkable aside from evidence of a urinary tract infection.

The concern during examination was for a problem in the brain. Riley's owner consented to an MRI of the brain which revealed a large mass in the left cerebral hemisphere (occipital lobe of the brain). The mass was causing severe compression of the underlying brain structures. A tumor called a meningioma was suspected.

After discussing options with the owner, the decision was made to take Riley to surgery for a decompressive craniotomy/craniectomy. During this type of surgery, an animal's head is placed in a craniotomy stand to help stabilize the head during surgery.

Brain surgery requires very close anesthetic monitoring and intra-operative care, so during the entire procedure Riley was cared for by our Critical Care team. A special drill was used to cut into his skull and remove the bone that was on top of the region where the tumor was located. The tumor was encountered and a majority was removed and submitted for biopsy (In many cases of brain tumors in dogs and cats, complete excision of the tumor is not possible due to concerns for injuring normal brain tissue). A piece of graft was placed over the bone defect to protect the underlying brain structure, and the muscles and skin were closed. Riley recovered very well from surgery and was up and walking around in his cage within a few hours.

The biopsy came back consistent with a meningioma. The tumor arises from the meninges, which are a system of membranes that envelop the brain and spinal cord. Meningiomas are the most common brain tumor in cats and dogs. In humans and cats, meningiomas can be removed almost completely during surgery as they do not tend to invade the brain. In dogs, they can be more difficult to remove, but are still amenable to surgical decompression depending on their location. Animals with these tumors tend to have the best response and prognosis with surgical decompression (if possible) and follow-up radiation therapy.

After discharge from NorthStar VETS, Riley was doing well and is back to his old antics at home. A recent conversation with the owner revealed that Riley was back to playing with and grooming his housemate, which apparently he had not done in a year or so. 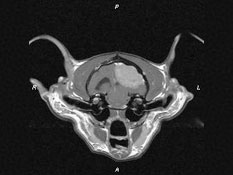 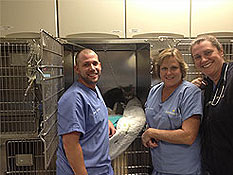